All About Empire State Associates 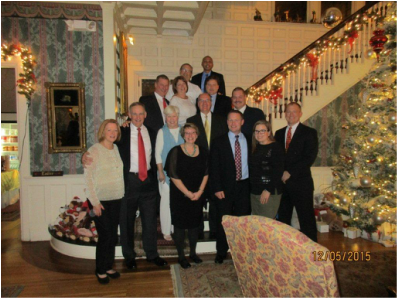 The agency was started in the 1940's by Eric Wellisch. He lived in New York City and traveled to Upstate New York weekly. He often flew to Buffalo or Rochester, then rented a car to make his sales calls. Greg Magratten joined Eric in the 1950's and the agency became Wellisch Magratten Associates. In 1974, Dale Norris bought Eric's share of the agency and the new partners operated as Magratten Norris Associates. Dale Norris had been working as a territory manager in upstate New York prior to this new business relationship. In 1979, Jim Martin associated with the agency and we became known as Magratten Norris Martin Associates. Jim Martin came from the wholesale business. Jim had started his own agency in 1973 and brought to our association several product lines, including Cherne and Fernco. Greg Magratten retired after 1986 when Bill Frenzel purchased Greg's business share and became Dale's partner. Bill Frenzel brought experience to the agency from his several years in the plumbing wholesale business. For a short period, the agency was called Magratten Norris Martin and Frenzel. In 1987, we changed our name to Empire State Associates.

We presently employee 10 people. Dale's son, Bill Norris, joined the agency in 1992 and became a partner in January 2006. Bill Norris has managed a sales territory in eastern New York since 1999. Adam Frenzel joined the company in April 2006. Adam moved to Rochester in May 2009 to manage that territory. He trained in our Ballston Spa office for three years and has been trained in both our plumbing and heating product lines. He is a graduate of SUNY Oswego with a Business Administration degree and lives in the Webster area. Adam's territory responsibilities range east to west from Geneva to Batavia and runs from Rochester south to Dansville. Troy Morgan joined ESA in August 2009 with over 25 years of experience; both in the plumbing wholesale business and as an installing contractor. Troy is responsible for our Buffalo / Niagara / Erie markets in western New York and lives in East Aurora, a Buffalo suburb.  Steve Lazickas came to our agency in 2015 with 35 years in the construction industry and 25 years as an owner of Empire Glass Block and Tile.  Devan Singh joined our team in 2015 with 25 years in the Radiant Heating industry.

Scott Phinney, our office manager, began working for ESA in 1993. His previous experience included several years of working in the wholesale plumbing business. Prior to joining our agency, Scott was employed as a territory sales manager for a national manufacturer in Upstate New York. Muffy Eggleston, Ed Cherko and Julia Norris comprise our inside sales and customer service staff.  Muffy has been with us since 2000, Ed has been with us since 2016, and Julia has been with us since 2019.  Diane Heffron joined our team in 2014 to help with customer service dealing with AO Smith and our buy sell company, ESA Parts.   Sharon Norris works part time as our bookkeeper and full time as our employee relations person.  Previous to Sharon, Carolyn Norris handled our book keeping for 40 years.  Carolyn was a dynamic part of our organization and she will be missed by all.

On February 11, 2020, CAROLYN SCHNEIDER NORRIS, of Clifton Park, N.Y., went home to be with Jesus. She was preceded in death by her parents, Bill and Kate Schneider, and stepdad, Edward H. Greene, sister, Billie Borland Smith, and brother-in-law, Ronald Borland. Carolyn was born in Huntington, W.Va., on April 29, 1943. She graduated from Chesapeake High School, Chesapeake, Ohio, and from the University of Cincinnati, Ohio. She is survived by her husband of 55 years, Dale Norris, whom she met while cheerleading for Cincinnati; her beloved children, Kim and Mike Paul (Milford, N.H.), Bill and Sharon Norris (Ballston Spa, N.Y.) and Mark and Lindsey Norris (Duluth, Ga.). Also surviving Carolyn is her sister, Kathie and Rick Gue (Barboursville, W.Va.) She was Mama to Julia, Katherine, Emily, Matthew, Sarah, Jack, Elizabeth, Ben and Carolyn. Carolyn loved to disciple people, young and old, in their relationship with Jesus. Her zeal for the Lord began in the seventh grade when she accepted Jesus Christ as her Savior. She immediately talked with two of her friends and led them into a relationship with Him. She lived her life as a witness for Him as a living example to others, exemplifying the grace and love of Jesus. She was loved by everyone she met and will be greatly missed. ​